Here's the story of my facial basal cell carcinoma and Mohs surgery.
I first noticed what looked like a pimple about 10 years ago, except it never went to head, nor went away. It grew slowly at first, then developed the classic rolled edge with a center depression. At that point, not knowing what it was, I could and did squeeze it and get bunches of what looked like tiny, clustered balls of pearly semi-solid gel.

(Note the small black dot below and to the right of the nose, along the crease of the cheek)

In May of 2005, at the constant nagging of my boyfriend, I finally made an appointment through my HMO to see a skin specialist. He suspected basal cell cancer, took a very tiny biopsy and gave me the result that it was *not* cancerous. However, he recommended I see a dermatologist. My HMO arranged for one out in Woodland Hills.

I went to that appointment and the lady took one look at the basal and said it looked like a large basal cell carcinoma. I told her a biopsy had already been taken and that the result was negative. She told me she wanted to do her own biopsy. That one was awful. The first didn't hurt, and he took very little. This one, I bruised on my face from nose to ear, and swelled like crazy as you can see from the picture taken 2 hours after. 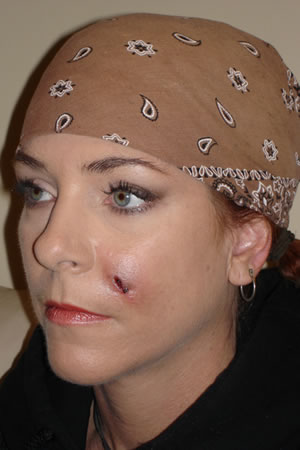 (This was just from the biopsy)

The results of that one were positive, so I was scheduled for Mohs surgery in August of 2005. I told the doctor just how large the affected area was, and even showed her by telling her to feel inside my mouth and outside at the same time. She gave me a condescending half-laugh, and scheduled a 4 stage Mohs with a surgical closure, meaning she would simply sew the wound closed after finishing.

6 hours and 5 stages into the surgery, my doctor was frantic. It was 3:30 in the afternoon and she had not yet achieved a clean slide. I began helping by telling her when I could hear healthy tissue being cut, as cancerous tissue makes a gritty sound and feel when sliced. By about 5:45 and the 7th stage, she declared a clean slide and just about dropped a brick from her scrubs at the size of the wound. She began faxing my HMO, saying a normal surgical closure was impossible and I needed plastic surgery reconstruction. I had not yet seen the wound myself, nor had my boyfriend. She packed the inside of the hole with dry gauze and covered it with tape, and sent me home saying that the plastic surgery needed to be started by 10 days' time, but that I was NOT to mess with the gauze or wound in the meantime. She herself wanted to see me back in 2 days.

A day and a half later I was in the emergency room - lethargic, weak, could barely get around. The emergency room doctors ended up peeling crusted and hardened gauze from out of the wound where it had firmly cemented itself to the inside. They did this without anesthesia of any type. I have never felt anything as painful before or since, including my ectopic pregnancy and appendicitis. My boyfriend was there, and he burst into tears when he finally saw for the first time what had been done to my face. It was getting infected, which was what caused my reaction. I was sent home. I called my doctor that evening. She basically said that since the emergency room had removed the gauze, she didn't need to see me back.

My HMO scheduled a consultation with another doctor. He took one look and said he wasn't the man for the job, since he specialized in small plastic surgery corrections and enhancements, not large reconstructive work. He refused the job and recommended another doctor. My HMO chose a center out in Topanga Canyon. This was now 2 weeks out from the surgery. Nobody had told me what to do with the wound. Nobody. Luckily I am proactive, and had researched online for hours before deciding to treat it like a large 3rd degree burn in order to keep the wound moist and granulating new flesh from the bottom, up. About 5 times a day I would flush it with saline and then cover the entire site with a burn cover which has gel to keep burns from crusting. It was filling nicely with new tissue, but hurt nearly constantly. Regular "bolts" of sharp pain would shoot through the area too. 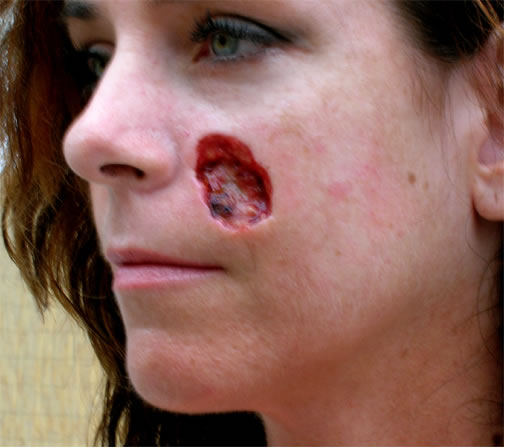 (One week after surgery)

The new place scheduled me for a consultation about 2 weeks later. I saw them only briefly. Their main concern was having me sign a paper that promised I wouldn't sue them. They scheduled me to come back the following week. Now I assumed that was going to be the day of my reconstruction, so I prepared mentally for it as best I could. My boyfriend took me. We discovered that NO...it was just so the actual doctor could take a look. By this time the wound was nearly healed. She said she'd have her assistant call me with a surgery date.

Three WEEKS later, I got a call from her snotty assistant saying they had decided they did not want to do the surgery after all. She said it was because she didn't think I could stop smoking (which I already had). She didn't care that I already had. I was very angry. I informed her that they ran their business in a shoddy manner, and that they had had the prior three weeks to call and let me know this, which would have allowed me to find a new doctor before the wound completely healed over, which it had. She laughed at me, and I told her to kiss my @$$. 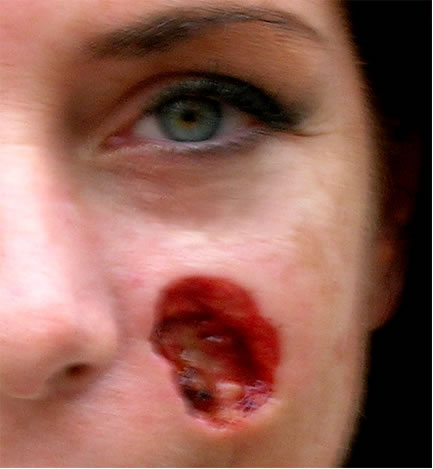 (As you can see, the hole is larger than my eye)

My HMO gave me the name of a new doctor. As always, I looked him up on google...and couldn't find anything. Not even a hint of his name or doctor's office or even certification. I found that seriously alarming. I called my HMO and told them that I was NOT comfortable seeing someone who to all intents and purposes, didn't exist, especially after everything I had been through already. I was told I couldn't see any of the people I had already been to, even though they were all part of my HMO. The man told me they would have to get special permission, and they'd call me back.

I never heard from them again.

(The scar from the surgery)

Yeah, it was quite the experience. I went from having no fear of doctors whatsoever, to being terrified of them. I already told my boyfriend that if I ever got another basal, I'd either cut it off myself or just let it grow. Nobody holding a scalpel is allowed near me again in life, unless I am unconscious and don't know about it. Then I started hearing about Cansema(black salve) and bloodroot, and started reading. I found what was obviously another basal cancer on my scalp. It was growing fairly rapidly once it diverted a couple blood vessels for supply. I purchased some salve, and here we are! The site on my head doesn't hurt any longer. I removed the ball of salve last night. It had been raised to the touch, but right now feels nearly level with my scalp. We'll see how it goes, but I am hopeful indeed. Whatever does happen, it cannot be worse than my horror show in 2005.

I hope this information helps someone!